In my usual style, let’s first start with the real story…

Mrs Henderson and The Windmill Theatre

Laura Henderson (1863 – 1944) was a wealthy, well-travelled and eccentric woman, the wife and later widow, of a merchant, with whom she travelled the world.  In 1915 she lost her only son in The Great War whilst he was fighting in France.

In 1931 she bought the Palais de Luxe cinema building in Great Windmill Street, London and had it remodelled into a small, one tiered theatre – renamed the Windmill Theatre.  Originally, it opened as a playhouse but due to a lack in profits, had to return to showing films.  In order to turn a profit, Mrs Henderson entered into an artistic partnership with Vivian Van Damm, a prominent London theatre impresario of the day.

Together they produced “Revudeville”, a programme of continuous variety acts running throughout the day and evening.  Initially this was also a commercial failure, until they inserted an emulation of the Folies Bergere and Moulin Rouge – adding nudity to the show.  Van Damme ensured that they skirted the law, by exploiting a loophole that stated that the performers could appear nude as long as they remained totally still – as nude statues could not be banned on moral grounds. 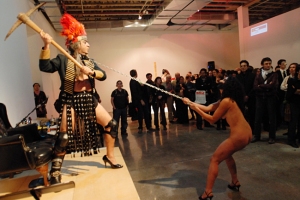 The ladies originally employed for these roles, and those thereafter, became known as “Windmill Girls”.  When Mrs Henderson died in 1944, she bequeathed the Windmill Theatre to Van Damm.

Van Damm ran the theatre until his death in 1960, leaving it to his daughter.  The theatre eventually closed in 1964.

The theatre itself became a British institution, famed for its nude tableaux performers and for having “never closed” during the Blitz – though this is believed to be a myth and good marketing!

The atmosphere of the film is immediately set by a lovely vintage-esque opening, putting you instantly in the mood and context.  There is also the disclaimer – “inspired by true events”.  This I like, too many movies portraying historical periods and/or events do not have this when they should.  The addition of that small sentence lets the audience know that although it is based on something that really did happen, artistic license has been taken.

That said, the artistic license taken isn’t intrusive and the main facts are there, but filled in with a story the audience can connect to.  In fact the script writer took a lot of information from several auto-biographies relating to the people and period, and so it may be closer to truth than we might think.

The film opens in 1937, Mrs Henderson (charmingly played by Dame Judi Dench) is attending her husband’s funeral and is now at a loss to what she might now focus her life on.  After an almost montage of endeavours, she finally settles on buying a theatre.  Here the story is paraphrased, she had actually bought the theatre in 193.  In the film Van Damm (played wonderfully by Bob Hoskins) is immediately employed to run the theatre.  It appears that setting the film in the late 30’s rather than early 30s is so that they can focus on the Second World War and more importantly, the Blitz.

The paraphrased history of the film, runs quickly through the lack of success of Revuedeville once other theatres begin doing the same, and the decision – made by Mrs Henderson in the film – to feature nude female performers. Again in the film, it is Mrs Henderson that finds and exploits the loophole in the law, due to a close friendship with the Lord Chamberlain.

The film is then padded out with a storyline regarding one of the performers, a storyline that is quite obviously set up to bring us to Mrs Henderson’s thoughts on the loss of her son in 1915 – something brought up several times throughout the movie.  If anything, this storyline is the weak link and seems only to serve as a catalyst for later events.

The progress from auditions through to the girls actually appearing nude on stage is both fun and interesting.  Van Damm’s talk to the girls, nervous about being nude on stage, is especially enjoyable and given his legendary protectiveness over the performers in real life, it is quite believable.

As war begins the audience slowly changes from the usual theatregoers to servicemen, many about to be posted to the front. Despite the Blitz, the theatre, which is below street level, is able to stay safe and open, with performers continuing to go on with the show whilst frightening bombing raids occur above ground.

The movie then brings us to the crux of the story – the legend that the Windmill Theatre never closed during the Blitz.  Due to new wartime regulations preventing people from congregating en masse in the streets, the order is given for the theatre to be closed.  With servicemen gathered in the street and the theatre doors closed, havoc is about to break loose, when Mrs Henderson arrives.  She gives a rousing speech about how her son went to the front possibly never having seen a naked woman, only to die, and that she would hate that to be the case for all the young men there.  The speech is moving, funny and excellently delivered.  I have no idea whether or not it actually happened in real life, but it is stirring and lovely and it is of course always a delight to hear Judi Dench say “fuck”.

The theatre is allowed to continue, and the show does go on!  The film credits explain that on her death in 1944 Mrs Henderson left the theatre to Van Damm.

I’m not going to lie.  I loved this movie.

As with most movies, it is questionable how much it sticks to the historical facts.  However, this film creates the world of the Windmill Theatre so lovingly, it can be forgiven for summarising some of it’s history in order to get to what can be perceived as the important bits.

The performances that we see during the movie are wonderful.  Will Young days a great job as the show’s leading man, fortunately not called up to the military.  The musical and dance numbers are great to watch, and when the nudes are added they are always breathtaking and subtle, in a way reflective of how they would likely have been.  The two that particular stand out are the fan dance, where the nude “statue” is hidden amongst the fans. But more so, the very first performance we see, where the nudes are situated behind blacked out photoframes and then revealed, as if paintings, when the lighting is changed.

Other highlights include the lovely chemistry between Mrs Henderson and Van Damm (the first time Dench and Hoskins have ever acted together!), their bickering, their falls outs, and most especially Mrs Henderson’s crazy ways of gaining access to Theatre after Van Damm has banned her.

The detail in the scenery, costumes, hair and makeup is flawless.  Portraying both 1930s and 1940s with beauty and accuracy.  The theatrical numbers were partially recreated from photographs and knowledge of the original shows themselves.  This film was made by people who obviously cared about getting it right, and it makes it so much more enjoyable that being the case.

All in all this film is a delight.