Blonde Bombshell Sandy Sure takes us with her to her performance at the Ohio Burlesque Festival, “Putting the ‘OH!’ in Ohio!”

The big day is here!  Travelling to perform at the Ohio Burlesque Festival!  After spending the night at a hotel at Heathrow airport, I got up at 5am, shaking with nerves, to catch my flight.  I love flying, but I was petrified of being in the wrong place and missing my flight! It wasn’t until we were about to land in New York to change planes and I could see all the famous landmarks like the Statue of Liberty that the reality of it all sunk in and I suddenly got very excited! 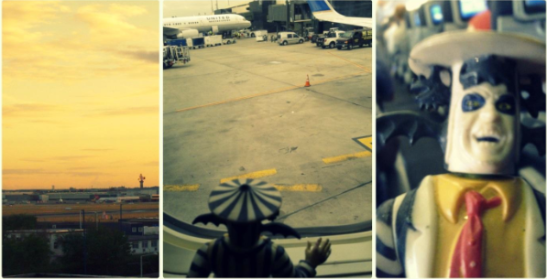 Beetlejuice lands in the USA (c) Sandy Sure

I was warmly greeted with hugs at Cleveland airport by Bella Sin, my host for the festival.  Bella is a performer, founder of Le Femme Mystique and a well-known local figure.  Bella gave me a quick tour around the city by car, which I enjoyed.  As clichéd as it sounds, I was amazed at how big everything was and how it looked just like the movies!  Well, it was my first trip to the US!  Cleveland is a great looking city, set on the edge of Lake Erie.

It was immediately apparent how much Bella loves her city.  She is very knowledgeable, passionate and proud of Cleveland’s history, particularly of its burlesque scene.  You can find her short video of Cleveland’s rich burlesque history here.

I awoke to find several cats had joined me during the night! Bella’s house is on a lovely street in the suburbs, and it was great to experience a bit of  ‘real life’ which I wouldn’t have had if I’d stayed in a hotel downtown.

Houses near where I stayed. (c) Sandy Sure

That morning I helped Bella fill the goody bags for the performers of OBF.  Lots of local companies sponsored the festival and/or donated items.  I couldn’t believe how much support OBF had from the local community, compared to how things are in the UK.  There was lots of positive publicity in local magazines, radio and online.  Bella and her team work very hard to make it happen and also do a lot of volunteering for other events in the area which creates a real community feel.  In our goody bags, we even had copies of a letter from the Mayor of Cleveland welcoming the performers to the city! 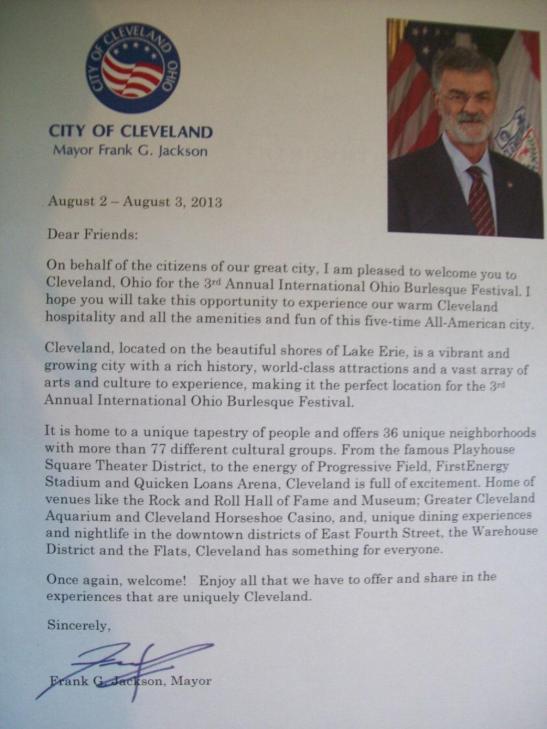 Welcome Letter from the Mayor of Cleveland

We met up with the lovely Tim and Tennie (who is part of the team that runs OBF) and had lunch at Melt– I’d seen this place boast a grilled sandwich with 13 types of cheese on Man V Food on TV, so was keen to check it out! I wasn’t disappointed….yum! 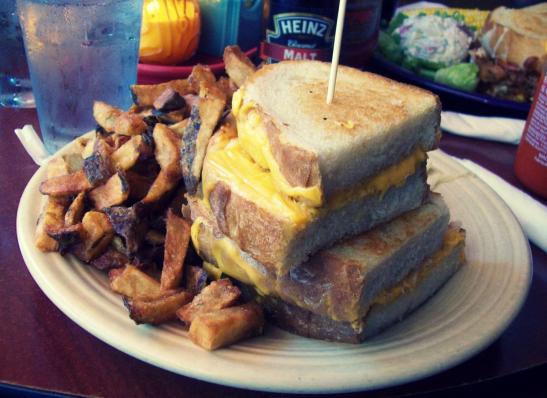 Sandy Sure outside Melt Bar and Grilled, Cleveland Ohio. (c) Sandy Sure

Next was a trip to a local vintage stores Flower Child and Big Fun.  Big Fun was heaven on earth to me- full of crazy joke shop toys and ‘80s toys that I knew & loved.  Flower Child was a rabbit warren of little rooms packed full of vintage clothes, furniture and all sorts of weird and wonderful things.  I came away with a cute/hideous musical doll to add to my tiki bar at home which I was very pleased with. 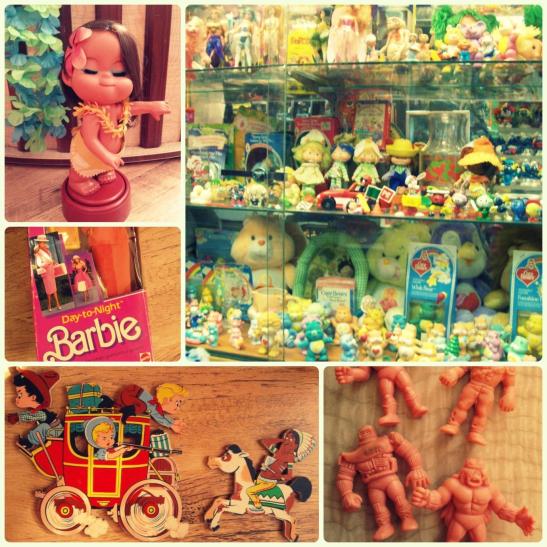 Opiumm Hayze and Pepper Sunshine had arrived at the house the night before, after a 12 hour drive from Minnesota.  Two fantastic ladies who I LOVED spending time with!  We had a quiet day at home, conserving our energy for the first show of the festival that night.  Myself and Pepper weren’t performing until Saturday, so we got our glad rags on and went to watch.  Before the show, we dropped by a music photo exhibition next door to the show, where we got chatting to a local councillor, who was very supportive of the festival.  I told him all about the Elvis festival we have in Wales, which he loved the idea of!  He also came to watch the show and was pleased to receive one of the ‘Buckeye Awards’ given by OBF to people who made a difference in the community.  These awards, as well as the fact that OBF were raising money for Equality Ohio, reinforced the whole community working together aspect of the festival, which I absolutely loved. 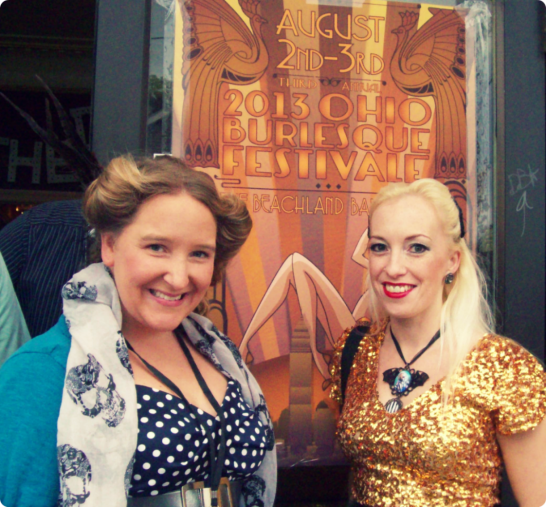 Pepper Sunshine and myself ready to watch the show. (c) Sandy Sure

Highlights of the first show for me were Opiumm Hayze’s epic Highlander act,  Satori Circus’s bonkers song, Peggy de Lune’s belting new singing act and Bazuka Joe’s amazing Speed Racer.  I got to meet Bazooka Joe’s lovely proud parents and their reaction to his act was brilliant to see!  I also loved Dangrrr Doll’s mesmerising Sonic the Hedgehog and Holly Hock’s classic glamour.  It was great having the chance to watch the whole show and see so many talented performers.  The only downside was that the stage lighting was inadequate, so it was very unflattering even on the most beautiful performers and difficult to see everyone’s faces clearly.

Myself, Pepper Sunshine & Opiumm Hayze made a brief appearance at the after-party, which was an inconvenient distance away from the venue, but were soon drawn away by the need for pizza and PJs after such a long evening!

More people had stayed over, including Bazuka Joe, Matt Knife and Xander Lovecraft, so Pepper and Opiumm made breakfast Minnesota-style for us all, which was delicious!

I spent the afternoon doing more eating and shopping with Xander, Pepper and Opiumm and then it was time to go to the venue for the show, where I would be performing.

Sandy Sure backstage with Xander Lovecraft. (c) Sandy Sure

I wasn’t nervous about the show as I was performing my Beetlejuice act, which is my favourite to perform as it gives me the opportunity to let loose and play a well-loved grotesque character in a way that’s unexpected in traditional burlesque.  The audience reacted very well to Beetlejuice- so well I couldn’t hear my music over the audience’s cheering at the start! I loved every second of it!  You can see the video here.

I managed to watch some of the rest of the show which was bursting with great talent. I particularly loved Red Rum’s Egyptian Mummy – a fantastic-looking act with so much attention to detail which had everyone talking about it!  Other favourites included Hazel Honeysuckle’s mega cute Cookie Monster, Tea’s stunning blacklight Invisible Woman, Smokin McQueen’s Jungle Book, the Boston Babydolls, Bella Sin, and Coco Lectric’s stunning Coco Banana act.

As we lined up on stage for the curtain call at the end of the show, it was announced that sadly, Dixie Evans had passed away.  Although the news meant that the festival ended on a low, it seemed an appropriate place to hear of the passing of such an influential legend of the burlesque world.

As most performers headed home, today I got to see a little more of Cleveland and spend time with Bella Sin, Matt Knife and Coco Lectric.  After Pho for lunch, we said goodbye to Matt (I wish I could have spent more time with him!) before going to a street festival at the Warehouse District where we saw robots, cheerleaders and a prettiest dog contest.  The day ended with Coco teaching me & Bella a feather boa technique class in the living room at 2am, which was an apt way of ending my trip! I have been a big fan of Coco’s performances via YouTube for years, and to spend time with her was truly wonderful.  She also kindly gave me a vintage dress, which was the icing on the cake! 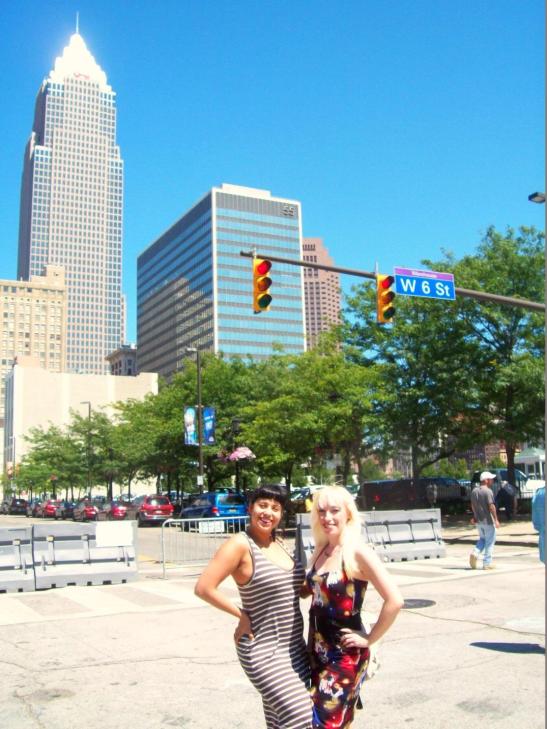 Sandy Sure and Coco Lectric. (c) Sandy Sure

After a sad goodbye to Bella, I made the long trip home to my man and dog, who were very excited to see me and even more excited about the treats I brought back! It was a fantastic first international festival experience and I can’t wait until my next one!

Alfie has a taste of the USA. (c) Sandy Sure

This entry was posted on September 24, 2013 by coochiecrunch in Coochie Crunch Blog and tagged Bella Sin, Buckeye State, Coco Lectric, Ohio, Sandy Sure.